After depositing my time card at Custodial Control's tight quarters tucked behind Carnation Plaza Gardens, I would set out for my summer shift on Main Street.
It was a closing shift on "Center," smack down the middle of Main Street.
I came on at 4:00 p.m. and would be there until my shift ended just about 12:30 a.m.
As I left the bustling little custodial offices, I would bump against fellow sweepers coming on for the closing shifts.
Most were tan and had come from a day spent lounging on Huntington Beach or Seal Beach or Corona Del Mar.  The joy of a closing shift was you were up late, slept in, and usually arranged to meet with your co-cast members to hang out during the day---often at a beach during those summer months.
It was the mid-80's, so just about everyone sported Ray Bans---classic Wayfarer sunglasses.
Jack Nicholson.
Risky Business.
Madonna.
"Where're you at tonight?"
"Fantasyland."
"Who's the lead over there?"
"Aronson.  He's pretty cool.  You?"
"I'm over on Main Street with Fraser."
"Can't beat that."
"Heck no."
"Say Hi to Arthur.  Saw him over at the Plaza on my way in."
"Yeah, me, too.  I'll tell him you're in Fantasyland tonight.  You know he'll ask."
"Going out tonight after work?"
"I don't know yet.  I'm still tired from the Over-The-Line tournament.  It's hard to run in sand."
"See you around.  Lunch at In-Between?"
"Yes.  Same time.  Save us one of the bigger tables if you get there first." 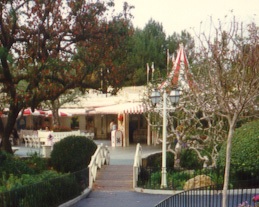 Turning to my right, pan and broom in hand, I would step out the door, walk through Plaza Gardens (pictured above circa 1987) and head across the Hub (shown below circa 1985) toward the middle of Main Street. 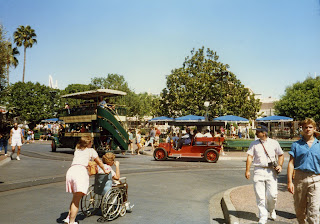 At the far end of East Center Street there was (and still is) a large gate leading "backstage."  Here is an old view of East Center Street from the late 1970s.  The gate of which I speak is around the corner of the building on the right side of the picture---the building where the famous Market House is located.  Of course, since the photograph was taken a locker facility opened at this location, along with an ice cream service stand.
I would open the gate and make a left turn past a large pine tree (which I believe is still there---in the picture below you can see its branches and shadow falling over the face of the building in the background).  Tucked near the huge trunk of this tree was a white area locker filled with custodial supplies. 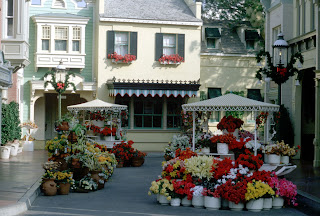 Immediately east of this locker was a large metal trash compactor.  It looked like the back of a trash truck.
Parked alongside the compactor were two large wheeled trash carts that were used for dumping the cans along Main Street.
To the north of this location was Central First Aid ("CFA"), with several ambulance vehicles parked behind it.
I once took out the side of a CFA ambulance van with a Main Street trash cart, but that is another story for another day.
The area locker was the "nerve center" of the custodial department's operations on Main Street.  Here is where the lead would meet with his crew, hand out sweeping schedules, post lunch and break times, conduct training exercises and other such business.
There always seemed to be at least one or two sweepers lingering in this area---on their way to, or coming back from, a break, a lunch, or the beginning or end of a shift.
The locker was stocked with everything a sweeper's heart could desire: white five gallon buckets, scrub brushes, extra pan brooms, push brooms, cleaning solutions of every kind and color, stacks of towels, paper towels, green-handled "grabber" tools, squirt bottles, Disneyland Souvenir Guides and maps, flashlights, gum scrapers, trash bags, hoses, nozzles---you name it.
We met here before and after parades and fireworks displays---standing in a huddle around our lead and his trusty aerial view map of Main Street.
He would assign us positions and plot out our attack on post-parade cleanup duties like a World War II squad leader.
"Kelly, East Side.  You'll push-broom the sidewalks into the street for the street vacs.  Helmuth, you've got one of the vacs.  Toth, West Side broom duty.  Grubb, you'll take Plaza.  Ingram, man the other vac starting at the Hub.  Stacy, you've got Town Square..."
And so on.
"Remember everyone, hands on handles and watch for feet!"
This line still rings in my memory.
Pushing a wide broom in a crowd of guests presented a hazard.
We were trained to keep one hand over the very top of the push broom handle as we wielded it.
This was meant to protect against jabbing the eye, stomach or head of someone passing by with the top of the wooden broom handle as we swept, since it was easy to lose sight of what was behind you as you went into the backstroke of a sweeping motion.
The "watch for feet" caution was obvious, but necessary.
Guests walking along Main Street were not anticipating a sweeper with a large push broom stepping into their path.  They could easily trip over the brush end of the broom, or even its handle, as you earnestly moved the head of the broom along the ground in front of you.
I learned quickly to make my presence known to guests and to sweep between the meandering throngs without taking anyone to the pavement (hopefully).
I especially liked the comraderie of the area locker.
It was the scene of many practical jokes, squirt bottle fights, party planning, water cooler talk, story sharing and team meetings.  It often doubled as a break area, too.
Our leads seemed cool to me.
They had walkie-talkies and were always radio-ing in to "Custodial Control."
We were like the Secret Service or the FBI of trash and clean up duty for Disneyland.
"Custodial 3, Ops. 1.  10-87 me at City Hall."
"Ops. 1, Custodial 3. 10-4."
Ooh...Ops. 1.
The big Kahuna.
The Head Honcho.
The BOSS.
Disneyland's operational CEO.
"Ops. 1" controlled the whole Park.
Attractions, custodial, you name it.
The person assigned to Ops. 1 duty was responsible for meticulously maintaining Disneyland's "show" for all of its guests.
They made sure everything ran smoothly.
When "Ops. 1" called on the radio, you better hope that you heard the call.
And you'd better answer quickly.
Our interaction with Ops. 1 usually involved an emergency clean up in a high profile location like an attraction, or the train station, or City Hall.
Believe me, our lead would snap into action when responding to such a call.
Usually with two or three of us scurrying right behind him.
We'd arrive, assess the situation, go into triage mode, cordone off the area (if necessary) and attack the problem.
If the restroom on West Center Street flooded (again), they we were in an instant, with plumbers not far behind.
An overflowing trash can just outside City Hall?  Our trash guy was bolting over there to dump it.
Someone threw up between the trolley tracks in front of the Candy Palace?
To the rescue!
Vomitus splayed out on the street, just in front of the window where a cast member was busily preparing a large batch of peanut brittle made for "Bad Show" indeed.
At the end of our shift, we would finish our closing routine and meet back at the locker before grabbing our time cards and heading to our wardrobe lockers to change for the ride home.
"Good night, guys!  Thanks!"
"See you tomorrow."
"What's everyone doing right now?"
"Man, it's almost 12:30 a.m., I'm going home to sleep."
"Some of us are heading to HoJo's."
"Not me.  I'll catch you next time."
"Come on!  They've got coffee!"
"Are they even open still??"
And the voices would fade behind me as I trudged homeward.
It never grew old.
Still hasn't, actually. 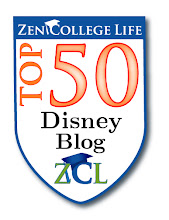 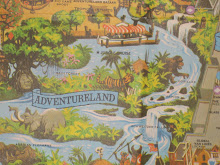